History is close to the surface in Poland. The wounds and scars are easy to see. Fifty years of material neglect under communist rule left them largely untouched while the wounds and scars of London, Paris, and Berlin were filled in, painted over or hidden behind shiny new facades. When I first went to Warsaw almost ten years ago the thing that shocked and astonished me most of all was the number of buildings still riddled with the marks of bullets, shells and shrapnel. Walking down some streets a little out of the center was like stumbling onto a set for Saving Private Ryan. Don’t get me wrong, these buildings are patched up and perfectly serviceable for living in, but superficial damage was never repaired. It’s deeply shocking and sobering to happen across a respectable suburban apartment building that’s quite clearly been raked by heavy machine gun fire.

There’s far less of this in Krakow, there was no major fighting in the city during the last war, but there is some and it still makes me stop short and wonder when I see things like this: 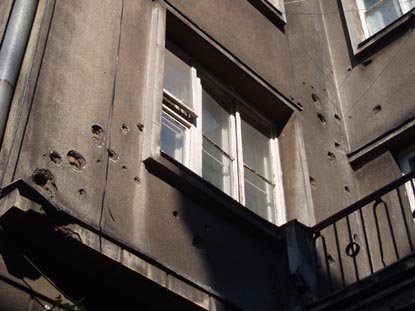 Who was living in that apartment when a few dozen 7.92 mm rounds walked across the outside wall and exploded through their window? Were they in? Had Pani Kowalska from downstairs popped in for a cup of tea? Were there desperate partisans crouching on the floor with arms covering their heads? Was somebody’s life switched off in a sudden shocking moment? Maybe whoever was there then is still there now. Maybe they’ve never been quite the same since. Maybe I should knock on the door and ask?

I like looking a buildings really closely on Wyspianski Unwinding

19 thoughts on “Poland’s scars of war”