A film starring Daniel Craig [James Bond] about a Jewish underground resistance movement that took on the Nazis has prompted a storm of protest in Poland. Defiance, directed by Edward Zwick, which recently opened in Poland under the title Opor (resistance), has been booed at cinemas across the country and banned from others because of a local perception that it is a rewriting of history and anti-Polish. 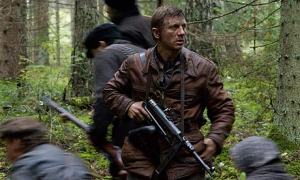 The story is of the ‘Bielski Partisans‘, a group of WWII resistance fighters led by three Jewish brothers called Bielski who hid out in the woods in what is now western Belarus but was then part of Poland. Not only were they resistance fighters but they also protected many others from being captured by the Nazis.

Poles, it seems, are not happy at the romantic / heroic portrayal of the partisans on the basis that, whilst they may have been fighting the Nazis, they also did some bad things against Poles in conjunction with their Soviet pals.

But many Poles, particularly nationalists, continue to believe that the Bielskis’ partisans also took part in a brutal 1943 attack led by Soviet partisans on the village of Naliboki in which 128 people were killed, despite historical investigations that have exonerated them.

The film has been the subject of much negative media in Poland, not least from Rzecpospolita and Gazeta Wyborcza. Media outside of Poland will yet again be led to the conclusion that anti-Semitism is still a problem Poland has to come to terms with.

It would be interesting to hear the Polish side of this story because so far, if you only read foreign media, the impression is one of sour grapes – the only people allowed to be heroes of Polish resistance are Poles (not Jewish ones) who were nice to all Polish people but killed lots of Germans or Soviets.