Krakow’s Festival of Stick Leaning is an annual event rarely mentioned in the tourist guides. Each year, as winter reaches its peak, the head of every household braves the frigid night air to perform the Leaning of the Stick. The stick is taken down from its resting place, often above the family stove, and decorated with festive red and white hazard tape. At midnight the stick is leant against the outside wall of the family house or apartment building and the stick-leaning orison is recited “I lean this stick at the appropriate angle as it has been leant before and will be leant again.”

The height of Stick-Leaning season in the heart of Krakow

The origins of stick leaning are a contentious subject. The proximity of the Festival of Stick Leaning to Ash Wednesday and the advent of Lent* have led many scholars to believe it has Christian roots. Some theologians claim that Abraham leant his shepherd’s crook against a big rock just before setting about his son with a knife, while other assert the leaning of the stick is a reference to Jesus taking a breather on the way up a hill. More recently a number of secular historians have pointed to similarities between the modern tradition and instances at pre-Christian archeological sites of things leaning against other things. 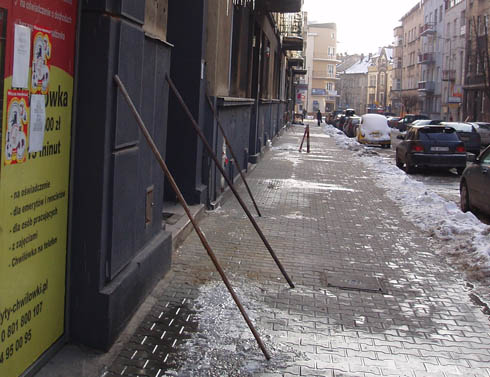 Not everyone can afford the red-and-white decoration, and some disapprove of it altogether

For now, the Festival of Stick Leaning has escaped the attention of Krakow’s tourist hordes and it has retained its charming local character. How long this will continue remains to be seen.

Okay, I lied about the Festival of Stick Leaning. In fact the leant sticks are there to warn pedestrians about huge icicles hanging off the rafters and, therefore, that it’s best to keep to the road-side of the pavement. They’re an admirably abstract semiotic case study.

The real reason for the Festival of Stick Leaning

To a local, a stick leaning against a building is an almost subconscious signifier that it’s wise to keep away. To a non-local it’s an invitation to think “Oh look, I wonder why somebody left that stick there” just before getting a couple of metric tons of snow and ice in the back of the neck. Very occasionally you might come across a hapless fellow tourist sprawled on the pavement with an icicle spear sticking out of their back and think to yourself “My god there’s a fellow tourist with a… hang on, what’s that stick doing there leaning against the wall?” followed by a low rumbling noise and 40 kilos of spear-shaped ice heading in your general direction.

Once, a long time ago, I saw a hastily hand-written sign saying “UWAGA SOPLE!” pinned to the outside of a building “Hmm” I thought to myself “I know ‘UWAGA!’ means ‘LOOK OUT!’ but I wonder what I should be looking out for. From which direction can I expect this peril? Will it chase me? Can it smell fear? Should I bribe somebody at this point?” And then I got bored and walked off. The encounter pretty much sums up my entire experience of Poland.

*leant: British English speakers only invited to enjoy this pun

A new statue of Józef Piłsudski is to be revealed in Krakow for Poland’s Independence Day (November 11th). Since the site is just around the corner from where I live I thought I’d pop down and have a look. Here’s a rare sight – the statue of a major national figure shrouded in plastic and waiting to be revealed to the world.

According to the plaque that accompanies it the unveiling will take place tomorrow on the 10th of November. Let’s hope nothing untoward happens between today and tomorrow that would make the plaque a liar.

These fine fellows have also been installed to accompany the former military dictator:

Krakow got a new statue of John Paul II yesterday. Forgive me if I’m not overly excited. Effigies of the Polish Pope are now so common that its hard to pop down to the shops these days without stubbing your toe on one. There are now 228 known public statues of Jan Pawel in Poland (this guy keeps a record). The Pope only died three years ago. According to a calculation I just pretended to do, if the production of Pope statues continues at this rate there will be more marble John Pauls than actual Polish people by about 2025. If that many pontifical figurines were laid end to end they would reach from here to the Vatican, not to mention forming a major tripping hazard. The Global Climate Thingy will almost certainly be worsened in some way I can’t be bothered to invent. Clearly, something must be done.

The only image of the new John Paul II statue I could find.

In classic Polish fashion the erection of the latest graven Pope was not without administrative difficulties. According to my, undoubtedly poor, understanding of last night’s news the church wanted to erect a John Paul outside the cathedral on Wawel hill, but ran into endless bureaucratic difficulties with the city authorities trying to secure permission. In the end they put it up anyway, but on a temporary wooden plinth so that it isn’t technically ‘built.’ They should have put it on wheels. I think there’s a great future in mobile papal statues. The devout could tow them behind their cars and underground Pope-installing guerillas could wheel them into prominent locations under the cover of darkness. It’s a potential growth area in these hard economic times. I’d mention my idea for giant inflatable popes if I didn’t fear straying even further into potentially disrespectful waters.

I have nothing against John Paul II, the Polish Pope was a great guy, seriously. According to every source I haven’t bothered to read he was a genuinely good person who had a genuinely positive effect on the lives of millions of individuals. That’s pretty much the definition of a good guy in my book. 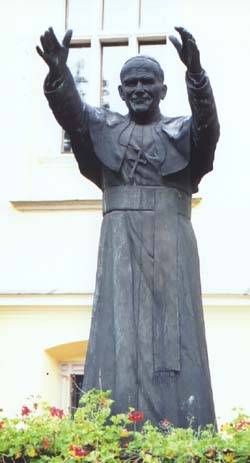 Imagine that on wheels; heathens would stand little to no chance.

The Poles love the Polish Pope, and not without good reason. If I was Polish I’d love him too. Even as a benighted non-Pole I have a large soft spot for him. I saw him once in Warsaw and he struck me as the kind of guy I wouldn’t mind delegating a whole lot of moral baggage onto, if I’d had the luck to be born catholic. 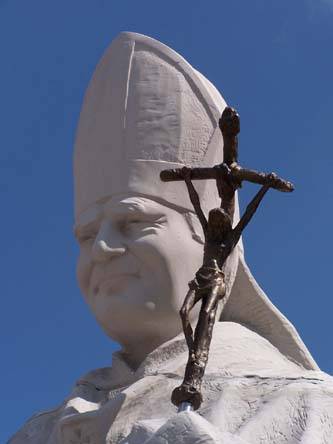 Kitsch is the word that springs, unfortunately, to mind. You have to wonder what John Paul would have thought of all this idolatry, and you have to conclude that it wouldn’t have been positive.

It had to happen. Polandian is experimenting with web comics. They warned me when I started doing Top Ten lists that it could lead to this, but I didn’t listen. Just Say No kids.

An easygoing Monday post with the emphasis on images rather than the hard-hitting prose we are notorious for (ahem).

I found a great site with loads of pictures Krakow buildings taken in the last decade of the 19th century, so I took myself of this weekend to see what they looked like today (14th September, 2008). 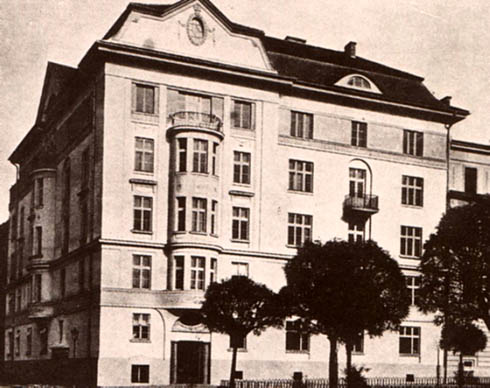 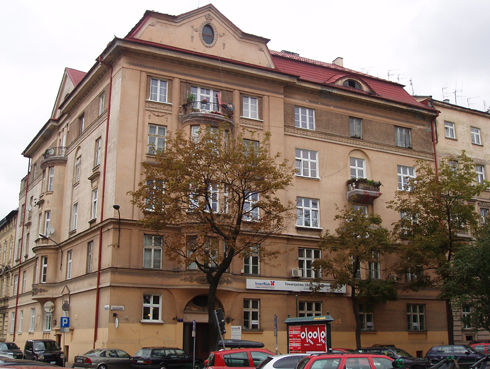 A fine solid building, little changed in a hundred years. Krakow’s monument to Rejtan is right in front of this building. 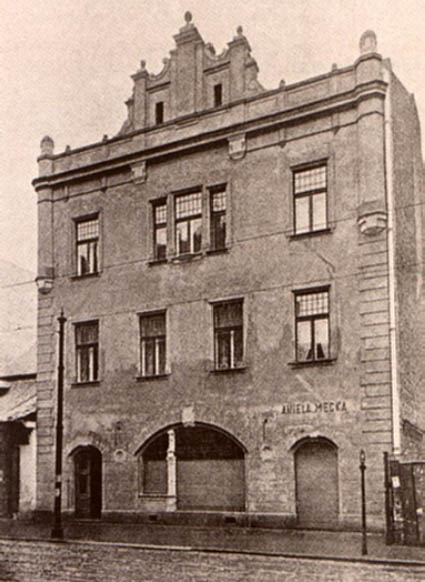 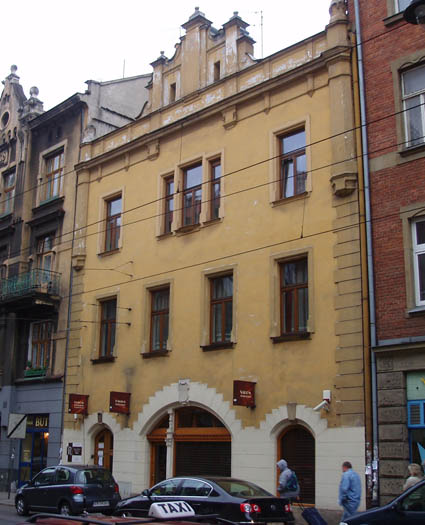 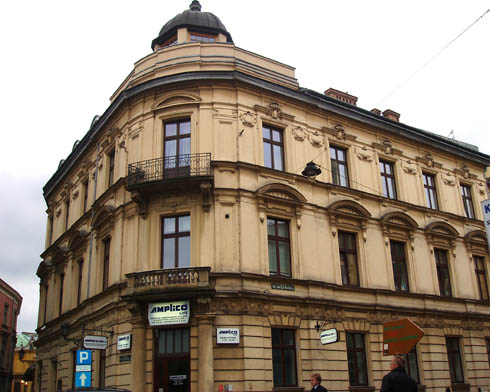 At the head of one of the main streets leading into the Rynek Główny. Whoever took the original picture was either 3 meters tall or standing on a horse. 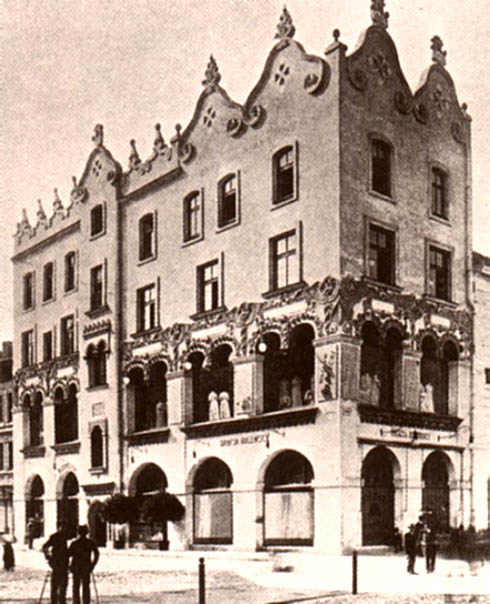 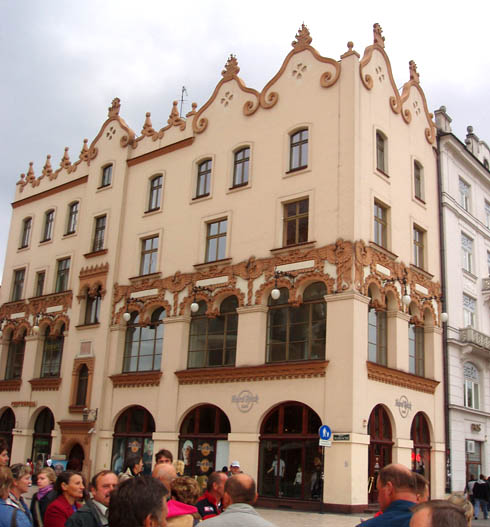 A fabulous confection of a building that has since undergone the indignity of becoming home to a Hard Rock Cafe.

Corner of ul. Karmelicka and Dunajewskiego 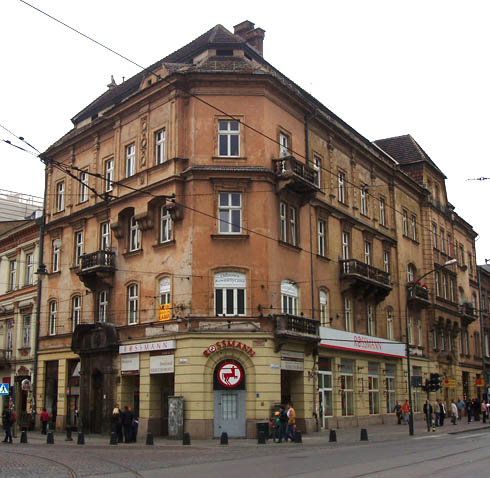 Situated on one of the busiest junctions in Krakow, leading from Karmelicka (my hood) into the old town via ul. Szewska. Note that you can now walk through the corner of the building on the ground floor, now converted into a pedestrian access – I wonder when and how that happened. 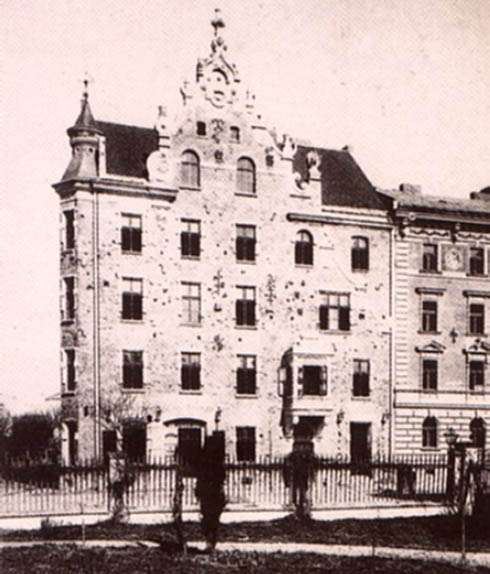 The building at the end of my street. A tricky one to photograph since somebody has thoughtlessly built a whole row of buildings on the opposite side of the street making it impossible to get exactly the right point of view. Worth taking a look at; there are all kinds of spiders and spider web references.

This building has featured here before as the star of Incident on Łobzowska Street.

I chose this one because of it’s unusual style. Turns out it’s currently undergoing renovation, and a fourth floor has been added at some point in its history. 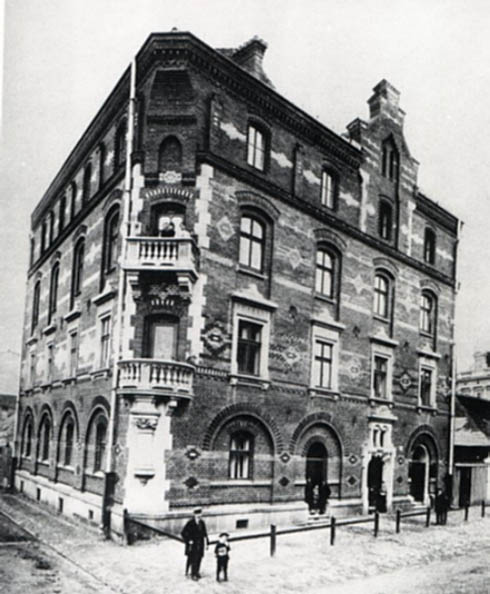 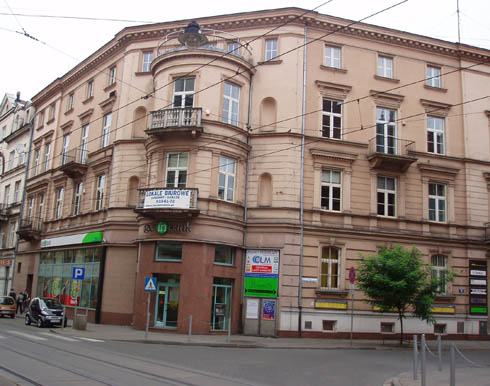 Another building at the end of my street. Note the classy marble cladding of the new bank tenants.

I’ve been guilty of this kind of post before, although not quite on the same scale.