Big plans are afoot here at Polandian headquarters. After a year living happily in the safe and cosy world of WordPress.com we feel the need to stretch our wings, move on to pastures new, and deploy other cliched idioms.

In the next week Polandian will be moving to its own domain hosted by some people who presumably know what the hell they are doing. Rumors of the shake-up have already swept Poland and fear and panic has hit major urban areas across the nation.

Poznan in flames as news of the Polandian move leaks out

We decided to conduct a quick question-and-answer session with ourselves in an attempt to restore calm.

Us: Moving? What does that mean? Where the hell are you going? We are internet noobs with zero mad skilz and don’t understand.

Polandian: It means you have to look at Polandian.pl, not polandian.wordpress.com, if you want to see the latest in haphazard ranting and top foreigner humor about Poland.

Us: Well that doesn’t sound so bad, I feel calmer already. Why are you doing that anyway?

Polandian: Well, we feel that after a year in the safe but restrictive environment of WordPress.com we are ready to take on the responsibility of bringing quality, timely information to our readers for ourselves.

Us: That sounds suspiciously like marketing nonsense to us, is there money involved?

Us: There is! We knew it! You’ve sold out haven’t you, you slimy capitalist bastards.

Polandian: Not exactly. Various shady characters with suitcases full of money have approached us in recent months, but we’ve turned them all down.

Us: Suitcases full of money? We never heard about this. We have Hummers to buy and loose women to pay off, why weren’t we told?

Polandian: Okay, this schizophrenic jive is starting to freak me out, can’t we just have a simple statement of intent and get on with it?

Very shortly we will be moving to Polandian.pl. We’ll let you know exactly when it happens. You might want to mooch over there now and observe the chaos; leave comments, generally mess around etc. Very little will change except that in the next few months you will start to see ads on the right-hand side of the page. The point of these ads is to pay our server costs and give us a bit of extra pocket money. We will not be writing paid posts.

Not all of my commercial ideas have been successful

Huge thanks to everyone who has read us, commented on us, and linked to us in the past year – hope you’ll all come with us to our new home.

My god, that last bit was nauseating…

You can tell it was a late night when I have to resort to quick and easy stock photos! Anyway, just a quick one to wish everyone in or around Polandian a very happy 2009!

Apparently there’s some kind of holiday coming up in the next few days, so nothing much will be happening around here (cries of “so no change then” echo around the country). Scatts will no doubt be ensconced in the bosom of his family cheerily illuminated from the glow of his new 57-meter tv, Pawel will be boogieing the holidays away in Torun’s hottest nite spots, and I’ll be in the land of gin and tonic attempting to catch up on a year’s worth of curries, English breakfasts, and battered cod. 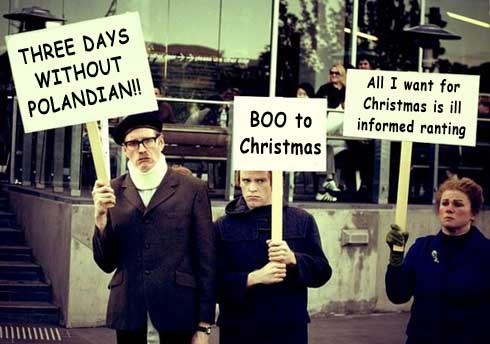 Have a damnably merry Christmas everybody, and a stupendous New Year.

We’ve got a new toy!

The folks at WordPress in conjunction with the people at Polldaddy have enabled a poll feature in our blogs. So here we go, the inaugural Polandian poll!

EDIT – good voting so far – thanks! What is a little silly is that there’s an option to vote “other” but no way for anyone to see what your “other” was – i.e. some explanation of your different view. The “other” option can be turned off when setting up the poll so we’ll do that next time. In the meantime, if you have an “other” you’d like us to hear then please leave a comment.

Since this is the 100th post on Polandian I’ve come over all nostalgic and misty-eyed. What fun we’ve had, what thrills, what spills, what belly laughs and what tear-jerking moments! This is the blog equivalent of those episodes on sitcoms when the characters sit around and recall all the side-splitting things that have happened to them. You’ll have to imagine the harp music and the wobbly cross fades for yourself… 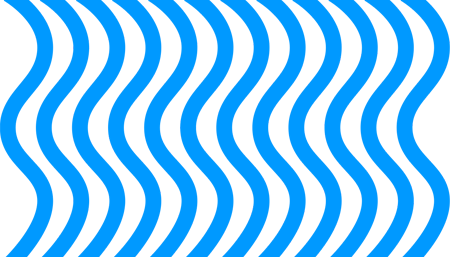 Way back, long ago, when we were just young Polandians starting out in the blogosphere we put these gems before the eyes of our highly discerning, intelligent, and remarkably good-looking readers.

Island1 wondered about strange letters chalked on his door in:

Every year, just after Christmas, it’s traditional for the local parish priest to visit all the households in the neighborhood and touch them for cash. There’s probably some praying and blessing that goes on too.

Pawel shocked and dismayed the nation (possibly) in:

Polish society is not at ease with homosexuality. And it is not surprising that many gay people try to keep their orientation a secret. This includes celebrities.

Scatts provided an indispensable guide to tourists with short attention spans in:

Where to go in Poland (ADD version)

Anyone considering coming to Poland for the first time, or first time as a tourist perhaps, might appreciate this very broad-brush overview of the options.

Darth burst on the scene in his inimitable style by twinning British cities with their Polish equivalents according to a logic that’s all his own in:

And Datblog commiserated with those trying to learn English in:

The problem a with the English

My deepest sympathies go out to any foreigner who’s ambition in life is to be truly fluent in English.

My, how we laughed! But we were just beginning. In the action packed weeks and months to come we asked searching questions…

How to make Poles angry? [Teaser]

Is the zloty on steroids?

…this significant change in the value of the zloty and the fact that it keeps getting stronger has some interesting effects at a personal level.

Feminism in Poland – A long way to go?

…the sisters ain’t doing it for themselves in the land of the red and white flag.

Made alarming suggestions and insinuations…

…insights into eating habits and all sorts of accidental background things

We busted myths about Poland:

Got some anger off our chests:

“Piss off, I don’t care if you understand this film or not”

Made startlingly acute observations about life in Poland:

…the odd sight of men taking shower wearing underwear, doing all sorts of acrobatics with towel to hide their business.

…leaving without telling anyone you’re going, without saying goodbye, thank you or anything at all that polite company might expect.

The other problem is when I do write it down I take one look at what is written and step back in horror.

WARNING – this article is not suitable for vegetarians, vegans, vulcans or sith.

And generally had a damn good laugh:

Clean jewelry. Soak the jewelry in vodka for five minutes, then rinse, and dry.
Or suck it.

Polish road signs: some of my favorites

Polish drivers operating in this area!

Ten things to remember when you have a Polish girlfriend

About 90 percent of all women in Poland are named Magda, Ola, Anna, Dorota, or Kasia. That’s it.

Ten uses for a Polish balcony

“Fifth floor balcony, comfortable railings for leaning on, plenty of things to stare at.”

Stay tuned folks! Coming up in the new series: Darth finally loses it completely and confesses his extraterrestrial origins! Pawel meets his evil long lost twin brother… or does he?! Dat comes clean about his days as a professional gigolo in the back streets of Manilla! Scatts renounces his worldly goods and joins a nunnery! And Island1 exclusively reveals what really happened between him and the Kaczyński twins in that Zakopane guest house!

All this and special guest stars too!

Where would we be without our fine and exceptionally attractive readers? Nowhere, that’s where…

Here’s a selection of some of the weird, wonderful, winsome and… um interesting things said in comments on Poladian:

Oh my god, you killed me! I’m SOOO totally on the floor laughing my lungs out :D

Originally, the post was supposed to be about torturing habits…

The problem with “wooden mushrooms” is something a native could tackle…

Brad, as far as I know you cannot put up a tent anywhere outside the designated areas.

I noticed that the words ‘faith’ and ‘Tusk’ often go together.

‘See Zakopane and die’ that’s it, I’m definitely not going.

Wieliczka is great if you are 70+ yo.

For me, however, I’ve seen it for so long and in so many places, that I hardly notice it any more.

‘Creative Tension’ sounds suspiciously like a euphemism for ‘unable to distinguish arse from elbow.’

I am not an expert on ballistics but…

Guest: We love you! …but we’re a little bit spooked by your apparent omnipotence :)

…your neighbours poison the cats (”which carry fleas and disease”), or, alternatively, report you to the police and straz miejska; the authorities come, fine you for the supposed mess, catch the cats and take them away.

…you are encouraged to breathe in deeply and admire the unshaved armpits of your fellow passsengers.

GO WHERE PEOPLE SLEEP on the pavement and see if they are just pissed or actually dead.

…a man who fell in love with a painting, a pair of Cheap Bastards who were literally cheap (they also offered a subscription), a person who couldn’t live without tomatoes…

…it’s obvious that the post as a whole should not be taken too seriously.

You didn’t include my favourite: “Beware of the paedophile!”…

we have no tradition of feminism, as our women were engaged in such more “important” matters as, let’s say, conspiracy…

Rudeness is an art form here. Learn to appreciate the sheer majesty of some people’s mastery of the genre

Ah. So he did withdraw. Interesting.

Contrary to what you wrote, I’ve yet to meet anyone who believes that Poles eat swans.

I will not cover my eyes – no way!

I’m sure I remember some topless ladies on posters…

My days of pushing tin are over, my nerve has gone.

Never attribute to industry that which can be explained by weather.

Oh my! It’s so absorbing.

It depends what you mean by “naked”.

I’ll go back to meditating upon the subject when the English start calling their private parts “public parts”.

Could it be tinky-winky syndrome?

They are not known as Political Whores for nothing.

…this post is so wrong I couldn’t stop laughing:))

…good to know there is a use for that old Polish Vodka I have laying around since 2002.

All I’ve got to say has basically been said.

I could go on forever, almost…