Tag Archives: Flag of the Republic of Poland

The first, second and third day of May are all national holidays in Poland, which require the national flag to be displayed on all buildings. Fellow blogger Island1 has already introduced our readers to the May festivities in previous post.

I had a walk around the town this evening and I was amazed at how many different ways the flag is displayed. Could they all be correct? Let’s investigate…

First things first. What is the flag of Poland? There’s a special act regulating this matter, which includes specifications for dimensions and colours. In short the Polish flag looks like this:

The Flag Of Poland

Things are never that simple. You may come across a situation when the flag also comprises of the Coat Of Arms of Poland. The Flag Of Poland With The Coat Of Arms

The second variant is also correct. It is, however, intended for use in Poland’s embassies in foreign countries, and on Polish ships. The reason is that the basic design is exactly the same as local flags of many regions around the world, such as Bohemia in the Czech Republic, Upper Austria or the Spanish province of Cantabria. The basic design is at the same time very similar to the flags of Monaco and Indonesia, both of which have the red bit in the upper half, while the lower half is white. The second design is used abroad in order to prevent things getting mixed up.
If you see the Flag with the coat of arms in a shop in Poland, don’t buy it. Go for the basic two-colour design.

If you are a home owner, even if you weren’t born in Poland, you might consider it a good idea to put the flag outside your property. However unlike public institutions you are not lawfully obliged to. If you do it, there are some official guidelines to follow (based on a Sejm Act, but again: there are no sanctions for not acting accordingly).
– The national flag may be on display from sunrise to sunset. Light should be installed if the flag is displayed longer;
– The national flag should be clean at all times, colour and pattern ought to be clear, the flag cannot be crumpled or frayed;
– The flag may not be put out in rainy days or in strong wind;
– The flag should not touch the ground or the base of the mast.

The law does not regulate the display of the European Union or other (for instance UK) flags. However priority should always be considered and the Polish flag should always have the prime location.

The Public Prosecutor’s Office in Toruń knows how to put out the flags correctly. They wouldn’t want to prosecute themselves would they? 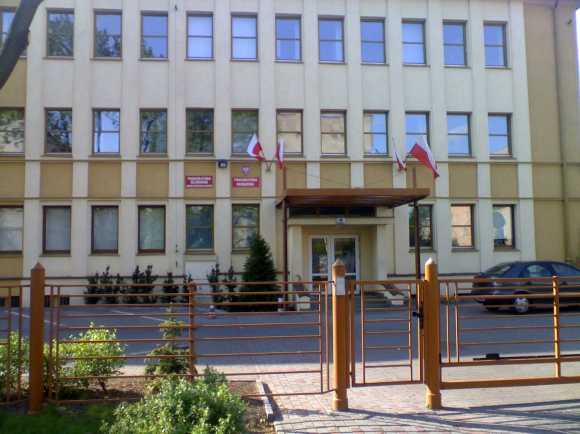 The Police Constabulary added the flag of the EU 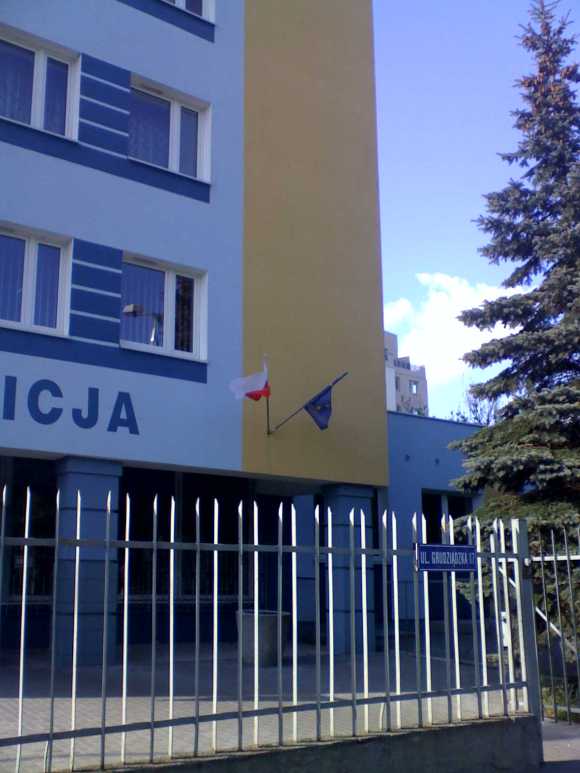 Very well. The fourth anniversary of joining the EU is also well-worth commemorating. But shouldn’t the Polish flag be on the right? Mhmmm… 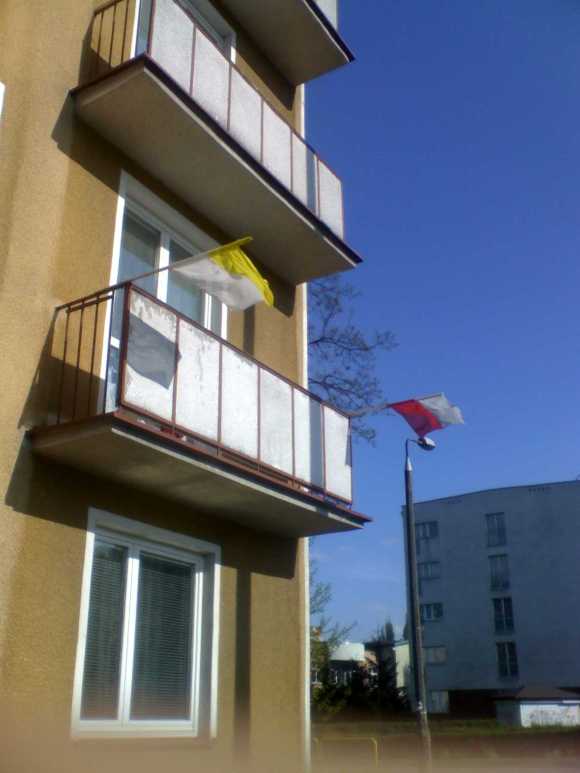 Although the administrator of this apartment building did put a flag out in the front, this resident obviously though it wasn’t enough, and installed another on his own balcony. He or she is probably a good patriot. The second white and yellow flag is the flag of the Vatican State. It’s an indication that the person who lives here is a keen Roman Catholic (or the apartment is a mohair beret army headquarters). 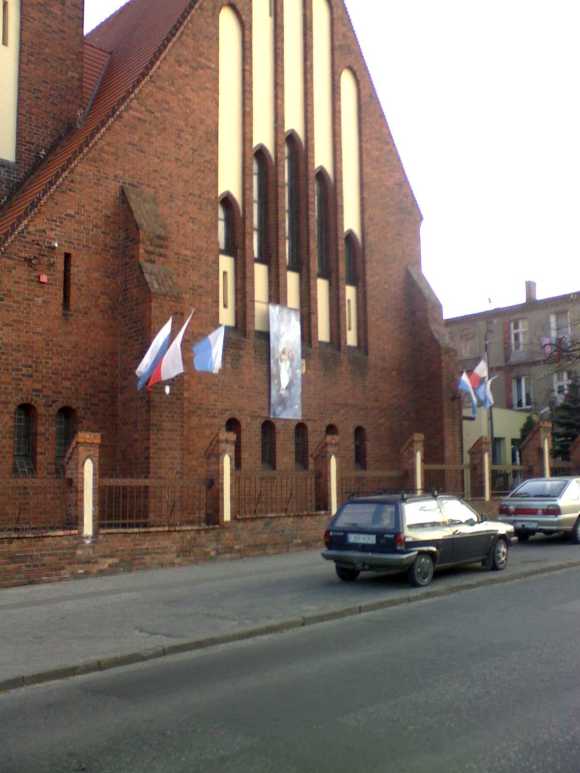 The Roman Catholic Church is not most known for asceticism. The display of flags here is really generous. Two white and red Polish flags, and FOUR white and blue flags of the city of Toruń. The Polish flags are in the middle (thus: most important), everything is fine.
Maybe the reason for so many flags is that this church is making up for the Eastern Orthodox church on the other side of the road (not shown), which didn’t put any flags out at all? 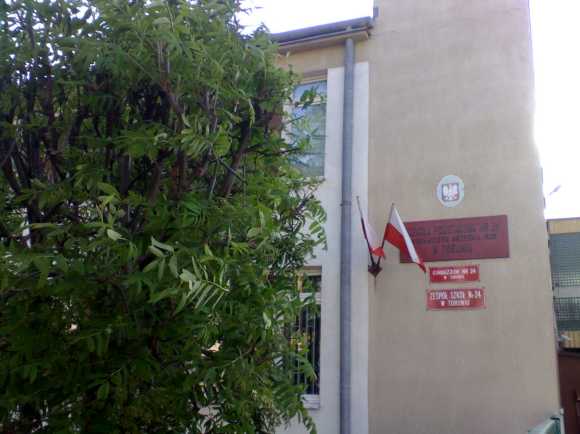 EU flags not present, but two Polish flags are there. Everything is fine. 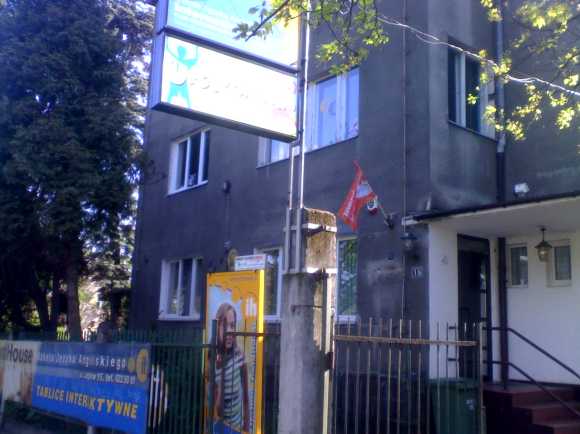 This is a school of English called International House, home to many English native speakers. If you take a closer look near the door, you still won’t know what the hell that flag is. Most certainly it is not the flag of Poland. This flag is actually an advertisement for the city’s bid for European Capital of Culture 2016. Why is it out there on a national holiday and not the proper flag?

International House – shame on you!

Accidentally this is also the school which taught me English for several years. You can blame my grammar mistakes on them. (Send your hate-mail to ul. Legionów 15, Toruń 87-100). :) 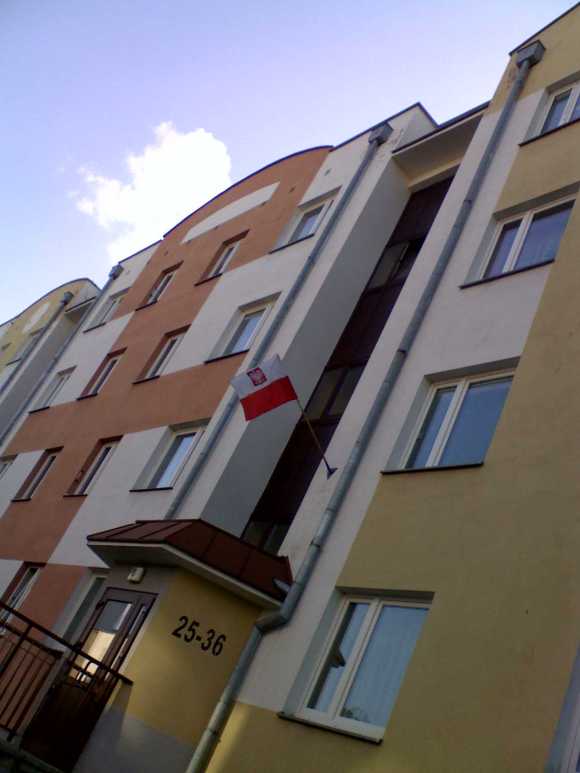 I assure you that this is not a Polish consulate on foreign soil, but a block of flats in Toruń. The administrator probably likes this style “better”. 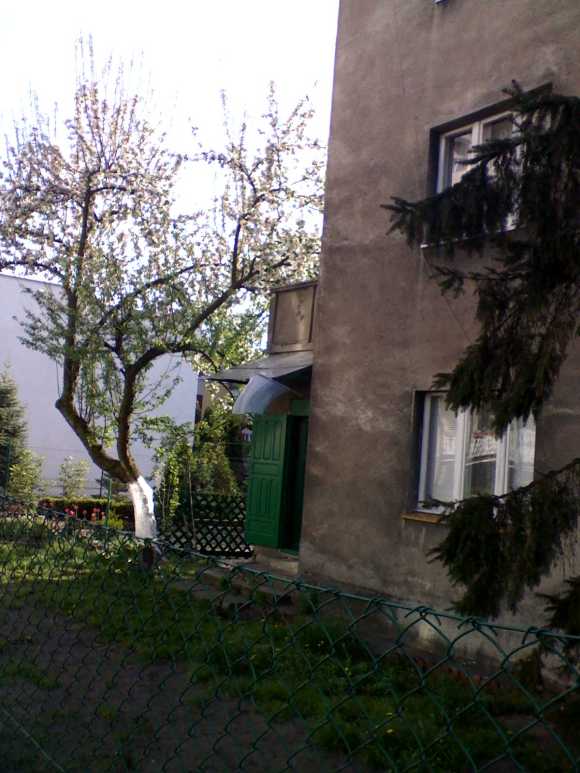 This dated residence with an abandoned front garden is occupied by a really unfriendly dog. The owner decided to put out one city flag – and no national flag. Since there is no obligation to put out a Polish flag, while other flags are unregulated, such a case is permissible (since not forbidden)

If you put out a flag on national holiday, do it with consideration.

——
My newsblog is never on holiday.