Last week the women’s final was featured on the national nightly news programe TVN Fakty. We’re too scared to imagine where this week’s contest might end up… 80% of the 460 Members of the Sejm are men – if this balance was recreated in out contest, we would have 40 male contestants.

Both contests will last one more week and then we announce the winners! Yay!

Sławomir Nowak is a 34-year-old MP from Gdańsk representing the Civic Platform party (centre-right) since 2004. Currently he holds the position of Secretary of State at the Chancellery of the Prime Minister of Poland. He is also the head of Prime-Minister’s political cabinet. He graduated from international relations at Gdańsk University and from management at Gdynia Maritime University. He has worked in advertising. Politically he was involved in liberal youth movement.

When you’re ready Mr Nowak we’ll try it on the water shall we?

On his way to the Madonna concert

Paweł Olszewski is a 30-year-old lawyer from Bydgoszcz, who also happens to be Civic Platform MP (centre-right). He manages exports for a furniture manufacturer. He was a spokesman for his party in the Kuyavia-Pomerania region and for three years he was a member of Bydgoszcz City Council.

In his own words: “My participation in socio-political life are a result of the wonderful years I spent in the Young Democrats association. There we learned how to successfully fight for our rights and take an active part in local political life.” 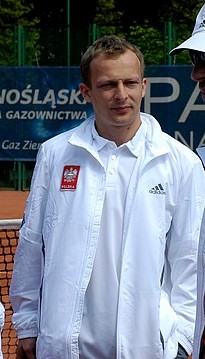 Okay, so I hit the yellow ball with the stick, right?

At the More Rights for Gingers rally

Dawid Jackiewicz is a 36-year-old MP from Wrocław. He represents the Law and Justice party in the Sejm. During the Kaczynski era he held the post of Deputy Minister for the Treasury.

He should relaunch his website so that we could write something more about him. 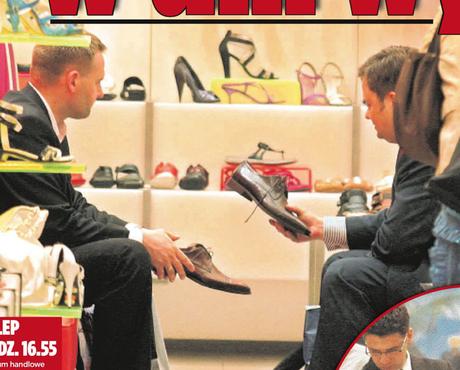 Caught by a tabloid photographer in a shopping centre during an important parliamentary debate! Naughty… but who doesn’t understand a passion for shoes?

Michał Jaros is a 28-year-old  MP from Wrocław. Born in Aleksandrów Kujawski (Kuyavia-Pomerania) he moved south to study at the Wrocław University of Economics. There he became an active member of a student’s union. Local Civic Platform noticed him, and offered a place on Wrocław City Council lists. He was elected, and after two years he was offered a good place on parliamentary election list.

His campaign became famous when he used a picture of a woman’s bum in tight jeans on his leaflet, coupled with the slogan “satisfaction guaranteed”.

At the student’s union bash

Michał Marcinkiewicz is, at 25, the youngest MP in the Polish Sejm. He represents Civic Platform and his home town of Szczecin. From 2002–04 he worked in the European Parliament. He is the president of Morze Bałtyk Szczecin volleyball team.

In his own words: “I can honestly say – Szczecin is my city. I was born and raised here. Here I got my education and my first professional experiences. Here I met many good and interesting people. I feel a strong emotional bond with this city, and since I remember I wanted Szczecin to be the place to live comfortably.” 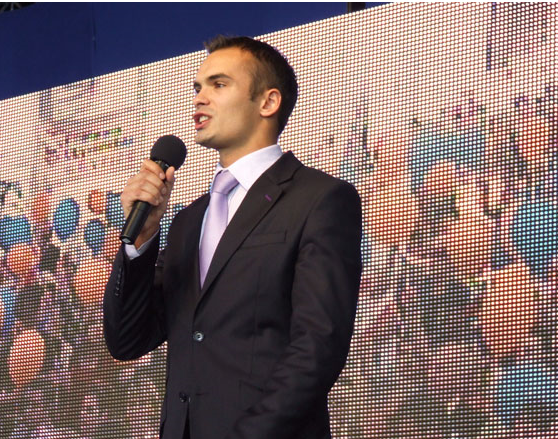 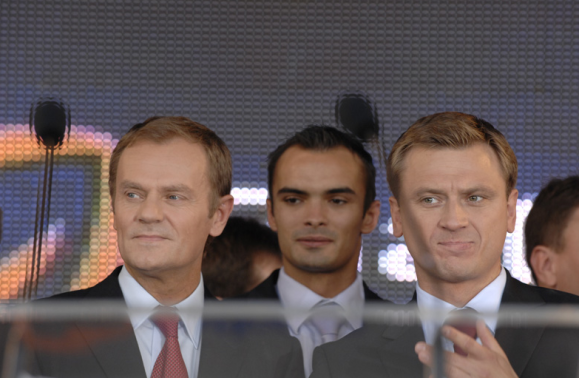 Łukasz Zbonikowski from Toruń is a 31-year-old lawyer and an MP representing the Law and Justice party in the Sejm. He is a professional politician: after experiences with the students’ union he began a career in the City Council of Włocławek in 1998, and was assigned to several political posts. He is the chairman of the Polish-Irish Parliament Group.

A Cypriot hotel accused Mr Zbonikowski of destroying a golf cart. The Speaker of the Sejm suspended his right to represent the Polish Parliament at the Council of Europe.

Mr Zbonikowski is a basketball enthusiast

Donald Tusk from Gdańsk is a 51-year-old history graduate, an MP and the current Prime Minister of Poland. His Platforma Obywatelska party (centre-right) won the 2007 election. During the communist period he was actively enganed in opposition, for which he was fired from his job. For seven years had been doing physical work in a co-coperative society. After the collapse of  communism he was active in politics in liberal movements. He is one of the co-founders of Platforma Obywatelska.

He plays football every Thursday evening. 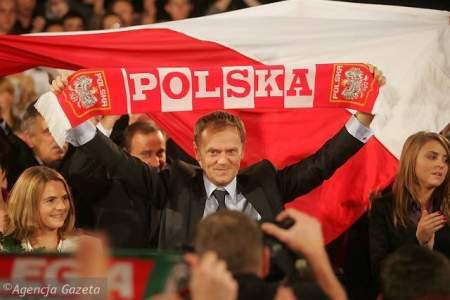 Paweł Poncyliusz from Warsaw is a 40-year-old MP (since 2001) representing the Law and Justice party in the Sejm. Since childhood he has been involved with the scouting movement. He studies history at the Warsaw University. For 8 years he was running his own business. He became famous when he agreed to a tabloid Fakt proposal to live for just 500 zł (120 euro) a month – the amount equivalent to what is left from a minimum wage after paying bills. The most popular Polish paper reported on his adventures everyday for a month.

In his own words: “Recently I became interested in impressionist paintings and Flemish painters”. 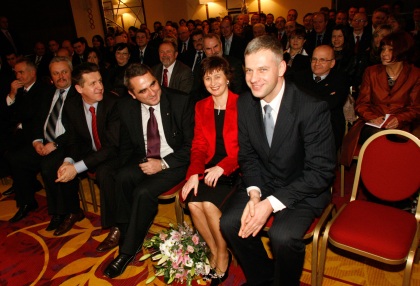 Damian Raczkowski is a 34-year-old law graduate and an MP from Białystok. He represents the Civic Platform party (centre-right) in the Sejm. He worked as a labour inspector (for a government institution controlling how businesses observe workers’ rights), and a realty manager for a local branch of Polish Rail.

Mr Raczkowski loves martial arts and has been training in taekwon-do for many years and holds a black belt. He also enjoys swimming, bicycle riding, tennis and snowboarding. 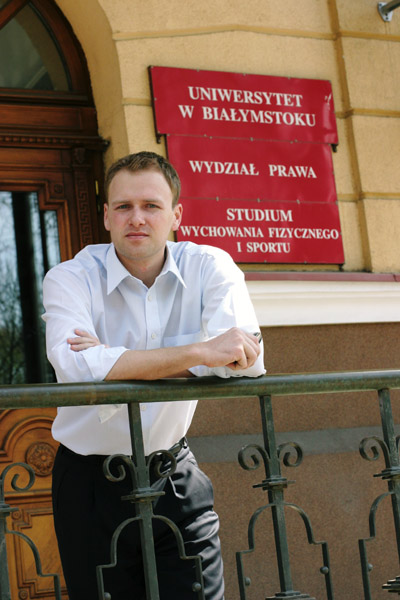 Hanging out at the Alma Mater

Jakub Rutnicki from Szamotuły is a 30-year-old political science graduate and an MP representing the Civic Platform party. He was one of the finalists in the Polish edition of Pop Idol. Mr Rutnicki is a sports enthusiast and plays football and volley ball. He also completed water rescue training. In his region of Wielkopolska he organises a beach volley ball cup bearing his name.

In his own words: “The Poland of my dreams is a country where people are proud of their homeland”. 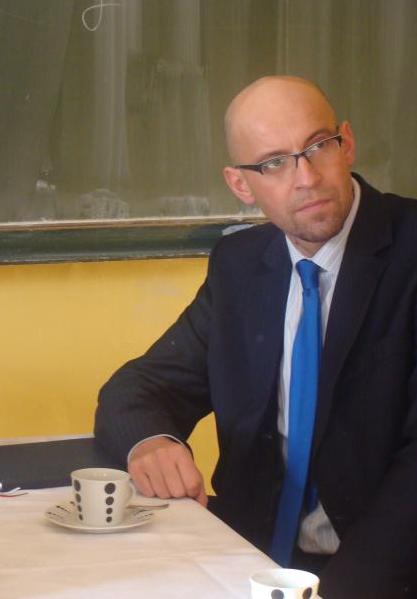 I asked for a latte, not a cappucino

Oooops… If these are the top secret government papers, where are the beach volleyball results?

Due to popupar demand from our regular readers the following contestants have been added in the last moment:

Radosław Sikorski from Bydgoszcz is a 46-year-old PPE graduate of Oxford University, an MP and the the current Polish Minister for Foreign Affairs. Previously involved with the Kaczynski brothers’ Law and Justice party, acted as Minister of Defence in their government. Before the 2007 election he joined the Civic Platform party.

Between 1981-1989 he lived in the United Kingdom as an asylum seeker due to his involvement in Polish anti-communist opposition. During that time he worked as a correspondent for such British newspapers as The Sunday Telegrph, or The Spectator.

He is married to a well known American journalist Anne Applebaum. 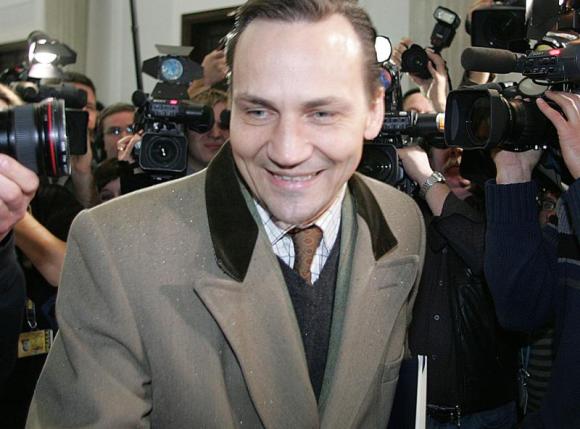 Wojciech Olejniczak is a 35-year-old MP (since 2001) from Łódź representing the Democratic Left Alliance (social-democrats, heirs to the communist party). He is a farming market graduate and management graduate at the Warsaw University of Life Sciences, holding a PhD degree in economics.  Between 1999 and 2000 he was the president of Peasant Youth Association. From 2005-2008 he was the chairman of his party. During the Leszek Miller government he acted as the Minister of Agriculture. 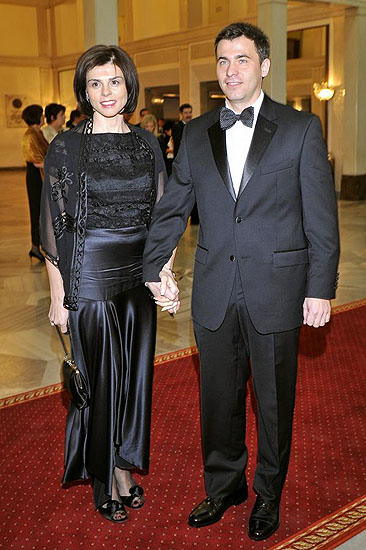 Inteviewed by Joan Rivers - live from the red carpet

Mr Olejniczak and his drag performance