I love those moments when a new piece of Polish culture / history smacks you in the face AND you learn a new word into the bargain. Even after 14 years it is possible to have the joy of finding something new!

I walked out of my office yesterday and found this:

First thought was a new idea to burn rubbish locally rather than transport it somewhere else, mainly because the Zlote T cleaners were hovering around it. Then thoughts turned to funeral pyre of leading Warsaw Indian community leader followed by protest of some kind (being outside the PKiN) but closer inspection revealed a lack of dead bodies, protesters or rubbish although the brazier was full of something intended to burn for quite a while. Looked like lower levels of coke and upper of peat or dried out lumps of left-over Christmas bigos. Then it dawned on me that this was intended to help people stay warm while out on the streets in -X degrees and I thought “What a fine idea that is!”.

You’d never find such a thing on the streets of London for a variety of reasons:

Further investigation of my nice Polish street fire revealed that the same thing happened a year ago in Feb 2011 when around 50 were lit around Warsaw, public places and close to transport hubs. I hadn’t noticed them last year at all. I also discovered the connection between them and the times of martial law (stan wojenny) in Poland between 1981-83 when the winter was also especially cold and soldiers / milicja had to stand around in the streets a whole lot.

The connection is so strong with these times that no reenactment would be complete without a koksownik. 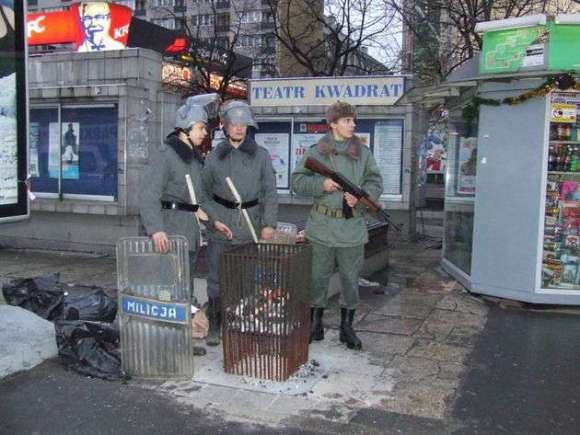 I’m assuming the latter is a more recent reenactment based on various clues within the photo itself.

Surprising how small things can make me happy!